Damp and mould can cause serious issues but resolving problems can sometimes be a contentious issue. Here, we take a look at the causes of damp and the responsibilities tenants and landlords both have in resolving the problem.

What causes damp and mould in a house?

Identifying the type of damp present in your property is just as important as dealing with it, as it can affect the way it’s treated. In the UK, damp commonly includes:

Regardless of what causes damp, if it’s not resolved, mould can start to grow.

Can damp make you ill?

Damp itself doesn’t make you ill but the mould that grows on it, can. There are actually several different types of mould you can find in homes but the most common is black mould.

Mould is a fungus and if you breathe in the spores, it can trigger a range of allergic reactions such as sneezing, a runny nose or a rash. It might not sound too serious, but like most conditions, it affects people in different ways.

Certain groups are far more likely to suffer from the effects of mould including:

Mould doesn’t just set off pre-existing allergies, the spores carry toxins which can cause migraines and affect your immune system.

Who is responsible for dealing with damp in a rented property?

Responsibility for damp and mould is often a heated debate but the answer often depends on what type of damp it is.

Typically, landlords are responsible for rising damp and penetrating damp because these are caused by structural issues (such as inadequate damp proofing or damaged window frames). This obligation is clearly set out in Section 11 of the Landlord and Tenant Act 1985 which states that it’s the landlord’s responsibility “…to keep in repair the structure and exterior of the dwelling-house (including drains, gutters and external pipes)”. Bear in mind that if you rent out commercial property, your responsibilities will depend on the type of lease you have.

On the other hand, it’s harder to allocate responsibility for damp caused by condensation. In some ways, this comes down to tenant lifestyle (drying clothes indoors or steam from cooking) but it can be argued that as a landlord, you should ensure suitable ventilation. For instance, fans in bathrooms, extractors in kitchens or dehumidifiers.

Either way, it’s in tenants and landlords interests that both parties work together to sort out damp issues as swiftly as possible rather than waste time allocating blame.

How can tenants and landlords prevent damp and mould

Preventing damp and mould is relatively straightforward. If you’re a landlord, some solutions might have a cost, but these can be worth the initial expense if it minimises future damage. 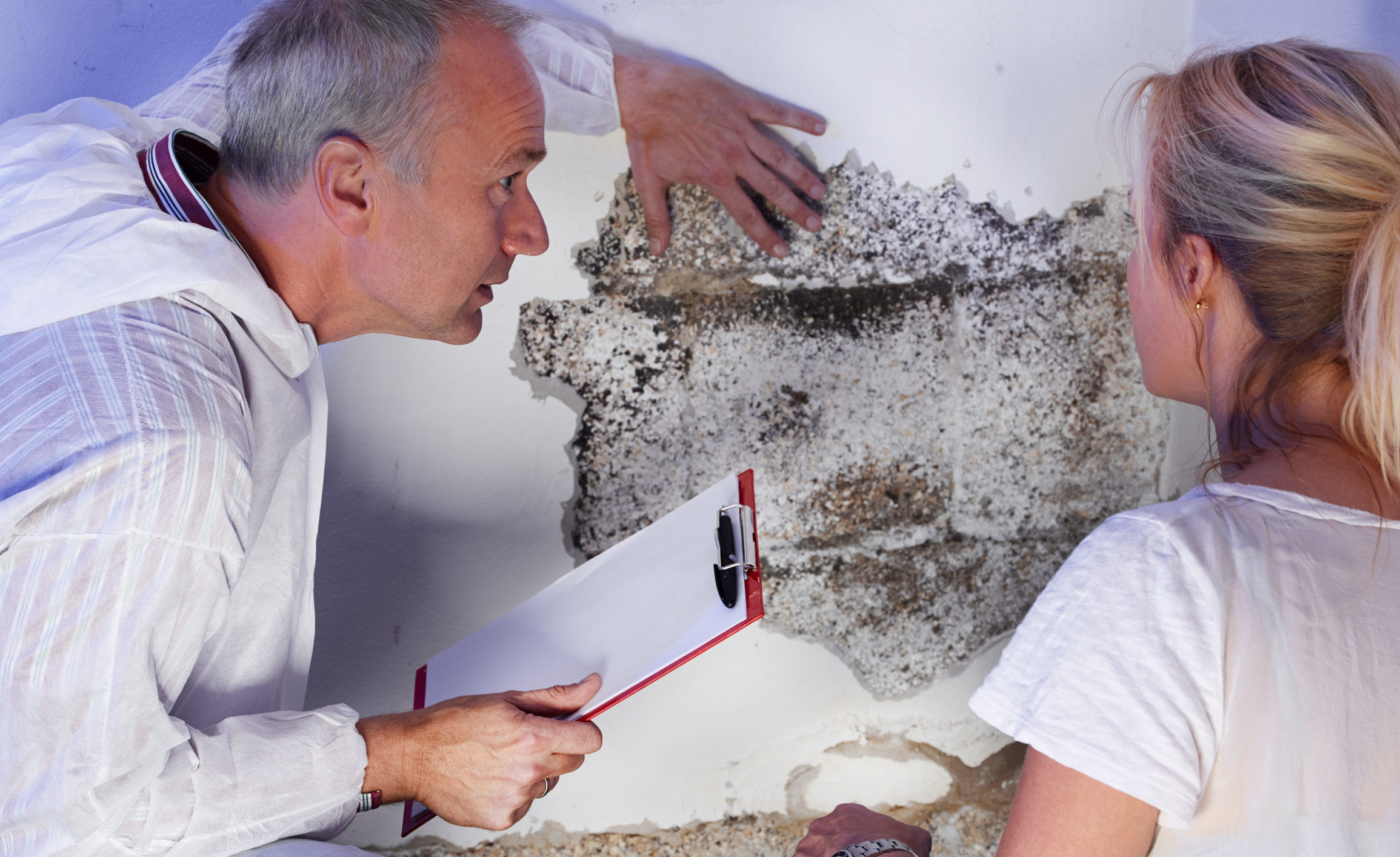 What landlords can do to prevent damp and mould:

Tenants also need to be aware of their own responsibilities. This means reporting problems as soon as they appear and allowing landlords access for repairs. Tenants should also be aware of any clauses in their tenancy agreement that set out maintenance duties – for example, keeping gutters clear of leaves and debris.

What tenants can do to prevent damp and mould:

How can landlords resolve damp and mould problems?

If damp and mould has already set in, it’s crucial to seek professional expertise. An expert will be able to identify the cause of damp which will enable you to find a long-term solution. Remember that while commercially available products might temporarily remove mould, they won’t resolve the root problem.

To organise professional help, you’ll need to find a qualified surveyor. You can search for one at RICS (Royal Institution of Chartered Surveyors) or at RPSA (Residential Property Surveyors Association).

There are also firms that specialise in identifying and treating damp and mould, but you should always make sure they’re members of an official trade body, such as:

Can I end my tenancy early due to mould?

If you’re a tenant, and you spot signs of damp and mould, it’s up to you to report it to your landlord.

If you’ve repeatedly asked your landlord but to no avail, you could speak to your local council who can compel your landlord to help. Plus, under the Homes (Fitness for Human Habitation) Act 2018, you can also initiate a court order to force your landlord to act.

Read more: Fit for human habitation: what landlords need to know before renting out a property

Otherwise, there’s no specific legislation that gives you the automatic right to end your tenancy early because of damp and mould. If you do want to leave, you have two choices:

Whatever you do, as a tenant with a signed tenancy agreement, you can’t simply leave or stop paying your rent.

What happens if tenants refuse landlord access for repairs?

Landlords have rights to reasonable access in order to inspect and carry out repairs on rental properties. However, tenants do have the right to refuse.

If you’re a landlord and your tenant continuously denies access to the property, you do have the right to reclaim it under Section 21 of the Housing Act 1988.

Section 21 is also sometimes known as a ‘no-fault eviction’ and is essentially a formal request that your tenants leave at the end of their fixed-term contract.

If you want your tenants to leave earlier than the end of their tenancy, you’ll need to issue a Section 8 eviction notice instead. To do this, you must have specific grounds for eviction – for example, if they’ve breached the terms of their tenancy agreement or neglected the property.

Does landlord insurance cover me for damp and mould?

Damp may or may not be covered by your landlord insurance depending on its cause.

Insurance policies typically exclude issues which arise because of poor maintenance or neglect. So, if for example, damp was caused by leaky gutters which hadn’t been adequately maintained, your provider is unlikely to pay out for repairs.

If, however, an insured event resulted in damp, providers are much more likely to offer compensation to repair any damage. For example, if a storm or flood led to damp problems. In these instances, your claim could also extend to include damage to contents you provide, such as furniture – which is also why it’s a good idea to have a comprehensive property inventory.

Landlord insurance tailored to your needs

At Alan Boswell Group, we understand that landlords have a wide range of responsibilities. Our award-winning insurance products don’t just mitigate financial losses, they offer peace of mind, knowing that help and guidance is at hand when you need it most.

To find out more about the products we offer, head to our landlord insurance hub. To discuss how we can tailor a policy to suit you, contact an expert member of our team on 01603 216399.