Like generations of farmers before him, it’s fair to say that the world has changed for Roger Garrett since he began farm contracting at the age of 24. As Roger’s business, R G Produce, took off, he quickly realised the need for external financial advice, and sought the assistance of Tony Robinson, Director of Alan Boswell Financial Planners. We caught up with Roger and daughter-in-law, Tina, to find out how the financial advice, and support with their employee benefits, has benefited them, their family, and businesses.

So, how did Roger’s career in farming begin?

“Business was different then. I used to sell direct to wholesalers, so my wife, Marion, and I would travel to wholesale markets in Covent Garden, Cardiff, Birmingham, Bristol and up and down the country with 24 pallets of carrots in our lorry and sell direct to businesses from there. We used to spend a couple of days a week travelling.

“That all changed with the supermarkets; our markets got smaller and smaller as supermarkets took over. That’s when I decided to farm potatoes instead and continue to sell wholesale.

“Nowadays, the farm is split between my two boys, Adrian and Wayne, and they have their own businesses. I still go out on my potato harvester, but they run their businesses from the land now.”

As the business progressed, and the markets changed, it became clear that planning for the future was important to the Garretts. How did they come to seek financial advice? 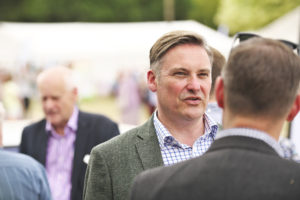 “When the business started to do well, we first looked at our pensions and we were in the fortunate position to be able to put lump sums into them. Since then, Tony has also helped us with investments, to plan our retirement, and the succession of my boys into the farming business.

“Tony manages all of it for us and we trust him to get on with it, really. We don’t have the time to be watching our pensions and investments all of the time. We needed somebody that we could trust and we know that Tony has the knowledge and understands our goals to be able to act on our behalf.”

How did Roger’s relationship with Tony come about?

“Tony has been our financial adviser since 2004. When he moved on [to Alan Boswell Financial Planners] we went with him. It’s a long time, but once you deal with one person and they get to know us, our family, and our business, you develop an understanding. We get on well with each other, so we’ve stayed with him ever since our previous adviser retired. Tony understands the way we think, and we value the relationship that we have.”

We rely on Tony; he’s loyal to us and we’re loyal to him. That [loyalty] is really important when you’re trusting someone to manage your pensions and investments.

Passing on the family business

While Roger still takes an active role in the farm, you’ll often see him out on a tractor or combine during harvest, it is now his two sons that operate their own farming business from the land that Roger cultivated. Within the farming community it’s estimated that over 77% of businesses are in, at least, the second generation of ownership, so planning for retirement and the handover of the farm was a key consideration for Roger. 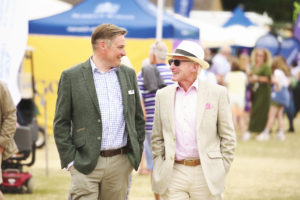 “About ten years ago I gave the business to my boys, and it’s now split so they both have their own individual businesses and they farm about 500 acres apiece of potatoes. We consulted with Tony over certain elements of that transition and Tony worked closely with our accountants on the tax side of things.

“It’s really helped us that Tony has an understanding of our family; when I first started using Tony’s services the boys were both working for me. Things have changed a lot since then, and now Tony advises them on their personal pensions, as well as the company pension.”

Providing a company pension for your employees became mandatory with the introduction of auto-enrolment in 2012, however for RG Produce Ltd it became clear that providing their employees with a way to save for their retirement was important to Tina before it became a necessity. Adam Revell, Head of Employee Benefits at Alan Boswell Group, manages the company pensions on behalf of Tina, which includes yearly reviews and the administration that comes with providing this facility to staff. Tina explains how this came about.

“You [Alan Boswell Group] started doing our company pensions just before auto-enrolment began, so around ten years ago now. We have eight employed staff and five of them have company pensions with us.

“We never really considered setting the pension up ourselves because the pressure of work and all the other jobs that land on my desk mean that I wouldn’t be able to take on the admin that comes with running it [a company pension] at the same time. It’s nice to have a bit of help with these things and we trust that Adam knows what’s best for our employees. We already had a relationship with you [Alan Boswell Group] as Tony manages our personal pensions, so Tony recommended Adam to us and it made sense for the company pensions to be in the same place as well.

“With Adam we know that any changes to legislation are kept on top of and that we’re fulfilling out duties as an employer. It can be difficult when you’re running a business on your own to keep up with these [legislation] changes along with everything else we do day to day, so it was a no-brainer to have someone else look after it for us.”

What is the ongoing process for managing the company pension?

“Periodically Adam will review all the pension schemes available to make sure that we are providing our employees with the best scheme we can. So he makes sure we’re complying with that Government stipulation. I don’t have the expertise, or time, to do something like that myself, so it’s great that we get the benefit of Adam’s expertise.”

And how is the working relationship with Adam?

“Adam’s always available if we need him, if I call or email I know I’ll get a swift response. Before the pandemic he used to visit us, now we have meetings virtually which works just as well for us as it has halved the cost and also gives me the flexibility to fit meetings around the other things I’m doing.”

The future is sunny for the Garretts. With the family farm continuing through the generations, Roger is set fair to enjoy his retirement, safe in the knowledge that his, and his family’s, financial futures are well looked after.

Every landlord wants to find good tenants for their buy-to-let properties. In this article, we share our tips and tricks for attracting responsible and pleasant tenants – and avoiding those ‘tenants from hell’.

A property owners' guide to subsidence

Subsidence happens when the land beneath a property starts to sink but it can be hard to spot and have a big impact on your home insurance premiums. To help you identify and deal with the problem, here’s our guide to subsidence.