This article first appeared in our Summer 2019 edition of Telegraph.

Hilltop Outdoor Centre is a family-run, outdoor education centre in North Norfolk. Perched high up with an unbeatable view of the Sheringham coastline, it’s surrounded by 75 acres of picturesque woodland and can accommodate 184 people at a time.

Hilltop was established by Martin and Sue Read in 1988, with help from two of Martin’s brothers, Glenn and Steve. As Martin proudly gives me a tour of the site, he is reminded of the spot in which he stood with his brothers when they decided to make a go of it. “I had the original idea when this site was 10 acres of land and a private house – nothing else. No trade of any sort. I left teaching and, thanks to my brothers, managed to buy the site for £190,000. We had four or five years of exciting 90-hour weeks after that!” 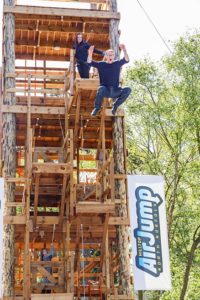 Fast forward to 2019 and Hilltop employs 50 dedicated members of staff, and it’s clear as soon as you step inside that it’s a close-knit group of people. Martin’s son, Oliver, grew up on the site, and began working alongside his Dad at a young age. “I took over the day-to-day running of the business from Dad about seven years ago. We’ve been a Limited company since 2018, and I’ve been a Director since then”. Oliver’s wife, Helen, is also instrumental in keeping the business running, managing most of the administration. “Helen started with us in 2003, just as our second accommodation site was being built. She has her finger on the pulse of all our marketing, sales, and the bookings” Martin tells me.

East Anglia isn’t short of breath-taking views, clean coastal air and unspoilt green space. So how does Hilltop establish itself as the region’s destination of choice for school trips? Boasting a return rate of over 90%, it’s likely down to the fact the team prioritise the quality of the experience rather than a rock-bottom price. “We want to keep our loyal customers happy, so we try to offer them something new each time they visit. That’s why so much of our budget goes on renewing or replacing equipment, and thinking of the next amazing thing, rather than having to spend it on lots of marketing to new customers!”

The ethos of the centre can be found in the way Oliver fondly talks about Hilltop’s roots. “Dad’s always had a real mission to make sure that whatever the children do at Hilltop, they have a really meaningful experience. He took that from his experience as a teacher, and his passion for wanting to make a difference to people. Put that with my Mum, who’s a details person with very high standards, and you’ve set the benchmark very early on.”

Dad’s has always had a real mission to make sure that whatever the children do at Hilltop, they have a really meaningful experience

A self-proclaimed ‘ideas man’, Martin and his team designed the site from scratch. All the activity equipment, including a 130m zip wire, climbing wall and England’s first Air Jump, is one-of-a-kind and built by his team. “Because of the nature of the site, with its hills, trees and rhododendrons, you’d never know when there’s 200 people on-site. If you walked around, you’d only see 40 or so, because they’re all off doing their own thing. That’s how we designed it, so each activity area feels special.”

Martin and Oliver spend a lot of time making sure their team live and breathe the Hilltop mentality. “All our instructors consider their work here as a career, not just another job. Our staff turnover, for an outdoor centre, is very low” Martin says, “and Oliver’s established a system of training, responsibilities and structure. Everybody’s working from the same book”. Even with his new role as Director, Oliver still finds time to work closely with his team. “Valuing the people who work for us and showing them commitment means they’re here for the right reasons – they want the client to have the best experience and genuinely care about their stay at Hilltop. In this environment, you’ve got to be caring.” 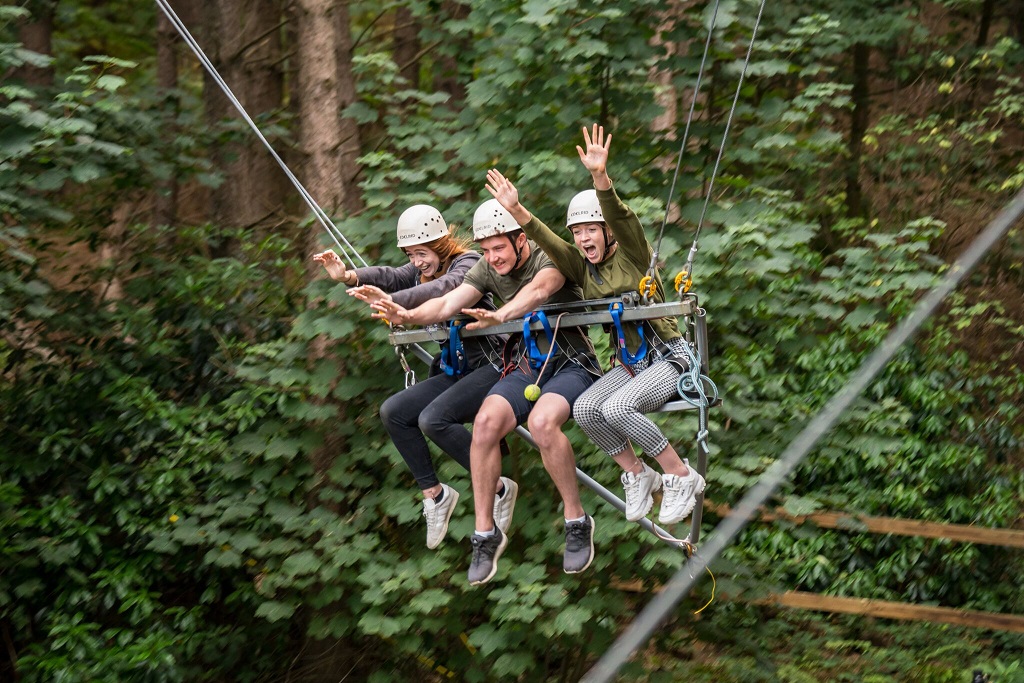 Hilltop has worked with insurance brokers Alan Boswell Group for over 30 years and, thankfully, haven’t had to make too many claims on their insurance. But, when an unfortunate sickness bug hit the site many years ago, Martin felt reassured by the proactive way in which Alan Boswell Group handled the situation. “After they had spoken with the insurers, they paid not only for the fumigation and cleaning, which was quite substantial, but they also paid for loss of income for the groups we had to cancel. I couldn’t believe how good it was. It was quite some time ago, but the payment was a significant sum of money.”

It’s this approach to claims that made Oliver reconsider his personal insurance, too. “The last thing you want to think about, when you’re dealing with something which could have a serious impact on the business, is whether or not the insurance will cover it. Hilltop is everything to our family. To have peace of mind, knowing that if the worst case scenario came along we wouldn’t have to worry financially, is indispensable. After I had difficulty claiming on my car insurance several years ago, I decided to move all my personal policies – I now know that whatever situation I’m in, Boswells will handle it.”

To have peace of mind is indispensable. I now know that whatever situation I’m in, Alan Boswell Group will handle it.

The future remains bright for Hilltop, as they explore new ventures such as corporate and client reward days, and Alan Boswell Group are delighted to be part of the journey. Top priority at the moment, Oliver explains, is planning for the next few years. “Most schools book and pay for their trip a year in advance, so I can already tell you what next year looks like. It means we can really plan ahead and calculate what we expect to earn in that time.”

It’s this forecasting that Alan Boswell Group can help with, and Oliver tells me how much he values the advice from our Norwich-based Financial Planners. “Having some unbiased, real forward-thinking guidance helps us plan better, and make our money work harder for us. If we’re going to save up to do something, where’s best to put that money? How should we invest?” With a turnover of £1.8 million, Hilltop are in a strong position to consider their investments, and work has already begun. “We had a meeting with Sally a few weeks ago, and we’re now beginning to lay the foundations for the next few years. It’s a question of using the money we make more wisely, and it’s those sorts of things that we’re going to work with Alan Boswell Financial Planners to achieve.”

We spoke with Roger and Tina Garrett about how Alan Boswell Financial Planners assist them with their personal pensions and employee benefits.

We spoke to Chris and Justin at Richardsons Leisure about how Alan Boswell Risk Management help them to manage health and safety at their sites.

We spoke to Jonathon Simpkins, Managing Director at creative office design company, Bluespace, on the origins of his firm and what has led to his success.